In this edition I will be comparing the advantages and disadvantages of full time and part time football. I'll also be touching on a subject that has always annoyed me a bit, the feeling supporters have about footballers and also player power after the sacking of Di Canio.

After my first 2 months back at part time training I have finally started feeling as sharp as I should be and training the way I have when I was full time. It is not easy turning up for training twice a week and getting to the same levels you are when you train at least 4 times a week. I have been finding it difficult to adapt to the lack of football, but keeping busy in the gym and on my bike has at least got my fitness up and I feel stronger as a result. Part time and full time both have their advantages, but it probably isn't noticeable from the outside as to what they are.

One of the big differences for me is that when you get a touch of a ball every day and get used to passing and playing with teammates it is noticeable how much better your touch gets and your understanding with teammates. When you only train twice it isn't as easy to know what your teammates are doing and where they usually run or pass into. It has definitely taken longer to get into our stride at the start of the season as you try and get your touch and learn how everyone plays.
Also the fitness aspect is something that is always talked about when full time teams play part time. I personally don't think there is a massive difference, but I think sharpness is the big difference. Training every day really sharpens up movement and gives you an extra yard of pace. I feel like I have that yard back now after 2 months training, but I'm sure without the extra work in the gym and bike I would still feel slightly sluggish.

Another huge difference is the bond between teammates and a camaraderie when you see them every day. You become best mates and talk about everything together. You laugh together every single day, push each other hard and encourage. It is a strong friendship and you would basically trust your mate with anything. When you only see each other 3 times a week for a total of 6/7 hours it is totally different. There is still the same banter, but the difference is you don't have spare time together between double sessions or in the morning where you talk every day. There is a different atmosphere, it is still a fun place the dressing room but it isn't quite the same. Luckily for me I have always been in good dressing rooms with no real problems, no 'bad eggs', and no in team fighting, so it has always been a good place.

I think the main difference with part time is the fact you do less work time wise, the muscles recover better and therefore there will be less muscular injuries. Nothing can be done about impact injuries, but if there are less strains and pulls of muscles this should help players play more games, and extend careers. Obviously some people are lucky and never get injured anyway, but I do think there is less in general from part time. 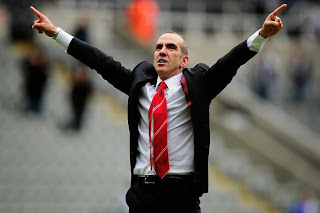 With the inevitable sacking of Paulo Di Canio hitting the headlines this week it brought up a topic that has always annoyed me, the attitude fans have towards footballers. There seems to be a general feeling that all footballers are overpaid, lazy and don't deserve all the riches they get. This feeling doesn't just come towards the top players, it is even the same in Scotland in both full time divisions. It is understandable that people think the top players are overpaid, they earn 100's of thousands of pounds a week. But at the other end of the scale is the players who play football to earn a living and keep their families housed and happy. Having worked with quite a high number of players, the percentage of 'lazy' players is so small it is almost insignificant. Occasionally you get some players who don't try hard at training but this is so uncommon. Having played football I think it is much easier to appreciate how much hard work has gone in to become the best players. The Premiership is so elite that you just couldn't get away with being lazy and get a game every week. Even 'lazy' players like Berbatov must have worked endlessly on his touch for it to become one of the best in the world. He is also extremely strong and isn't as slow as some people think. It isn't by luck players become stronger and quicker, improve their finishing, touch, passing and heading. It is through hard work and like any other job, if you don't work hard, you don't keep your job. Add on pre season to that, where players will be hammered at training for 2/3 weeks 2 to 3 times a day, and they will all push each other to their limits. It isn't easy and most supporters couldn't do it, so maybe we aren't as lazy, overpaid and under worked as some people think. 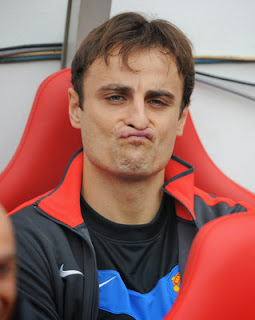 The fact that Di Canio was sacked due to player power led some fans to inevitably blame the lazy players and that he was right to work them so hard. But it showed on the pitch he was wrong, and his attitude towards his players was completely unacceptable, the way he talked about them in the press. It is no wonder they got him sacked by speaking to the board, he isn't a good manager if he isn't a team player and thinks he is better than his team. Sunderland are better off without him and it wouldn't surprise me if they went on and moved up the table from now on in.

Posted by David Weatherston at 10:55