One thing is certain in football, it can never be good 100% of the time. Every player will have their ups and downs throughout their career, but hopefully by the end of it you will have had enough highs to feel like it has been a success. At 26 I look back on my career so far as somewhat of a success, but also a feeling of underachieving.
I have always been my worst critic, which can be a good thing as it drives me on to try and improve. But what I have found over my career is that the best players I have played with all have so much confidence in their ability and always trust what they are trying to do. For me self belief has always been an issue and it can affect performance dramatically. When my confidence is high I know I can beat most defenders I come up against for pace and can create chances and score goals for my team. But when confidence is low it can feel like you can't beat a player, and end up doing the simple thing and just passing backwards. For a winger, consistency has always been something that is difficult. Even at the highest level the wingers struggle to play consistently week in week out(Nani, Walcott, Pedro are 3 top level examples), but when they are on their game they can cause so much trouble with direct running and pace. As I have gotten older my consistency has improved but it is still difficult to be dangerous every week, which I know frustrates fans, but I guess it is the enigma of a winger.

I was sent a link to this interesting article (article on Stuart) about ex Queen's Park teammate Stuart Kettlewell(Ketts) earlier today, and it made me think about the good times had at QPFC. Ketts is one example of what was a great QP team back in 2006/07, that won promotion from division 3, who went on to better things. We had an extremely young team and played football the right way for the full season that included beating Aberdeen in the League Cup and winning all 4 games in the divisional playoffs to win promotion. The 4-2 win against East Fife in the first leg of the playoff final was a great night for us, and will always be remembered for 'the picture'(below) that shows how much it meant to us all. Steven Canning had just scored an unbelievable chip from the edge of the area, and it set us on our way to promotion.

Most other players went on to other clubs playing second division football, the majority being successful.

Personally I feel like I haven't fulfilled my potential from helping QP to promotion, but looking back so far, I have had decent success in my career. One promotion with QP has been added to with 2 Challenge Cups, 2 Hampden semi finals, and three 3rd place finishes in the 1st division. It isn't great, but it is something I can look back on when I am older. Perhaps I made the wrong choice or choices after leaving QP, but we live and die by our decisions, and I can't change them now. I have certainly had a lot of fun, and made some great friends along the way. Now it is on to the next chapter, wherever that may be, and hopefully I can have more success doing it. I always look back at my time fondly at QP, and I know the rest of the players do as well, because every time we meet up it is always talked about, the great nights at Firhill, Paton's 30 yarder at East Fife and the good times we had a training. It will never be forgotten. 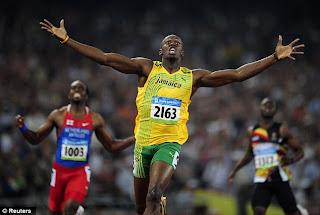 Sooo, enough about me, lets talk about some other sports. Athletics is the big headline grabber this week with all the reports about failed drugs tests by Asafa Powell, Tyson Gay and Sherone Simpson(bbc article).
With the failed tests of another 2 of the fastest sprinters in history, Usain Bolts closest rivals, it again leaves everyone wondering if the best athletes are clean. Ben Johnson, Marion Jones, Carl Lewis, Linford Christie, Veronica Campbell, Justin Gatlin, Dwain Chambers, Butch Reynolds, to name a few, are all top Olympic performers from the last 20 years who have tested positive for some sort of banned substance. It means that Usain Bolt, who is at least 1/10th of a second faster than any of them, is either much better than them all, a complete freak of nature, or something isn't right. We all hope that he is a freak of nature, because it is special watching him running at full speed, and for athletics sake he needs to be clean. If it turns out the poster boy of athletics is another one to turn to drugs for that extra boost, then the reputation of sprinting and athletics in general could be completely lost and the public could lose interest.

Posted by David Weatherston at 12:44